10 Greatest Nurses of World War I 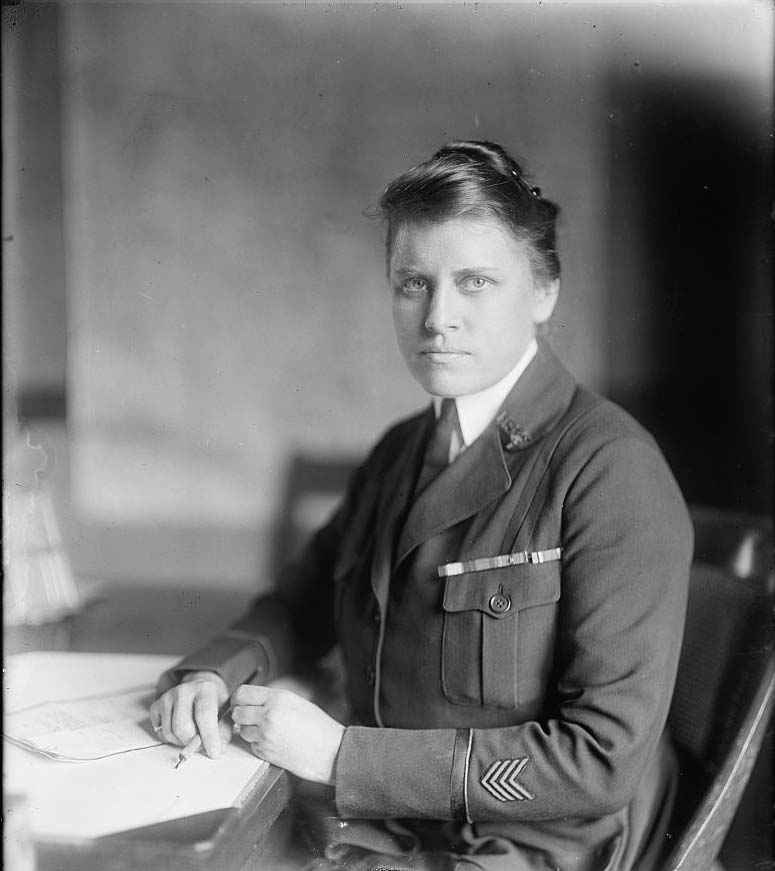 The greatest nurses of World War I are from all parts of the world and worked tirelessly to help those injured. The nurses of World War I are truly inspirational heroes. They overcame insurmountable odds, endured gender-based prejudice, and helped a flood of wounded soldiers under enemy fire. Each of these courageous women, though patriots of different countries, were ultimately devoted to the true calling of nursing: saving human life.

Some did it through administration and coordination. Some stood firmly at their posts while bombs exploded around them. And others were so passionate that they continued their work despite being in direct opposition to military law. In the end, there is no doubt that each nurse is a credit to the nursing profession.

Lenah Higbee was one of the first nurses to join the U.S. Navy Nurse Corps when it was established in 1908. This move required sacrifice and perseverance, as many members of the Navy considered female nurses unwelcome pariahs, indeed, they were not even given rank.

Lenah Higbee gave navy nursing her all and was quickly appointed Chief Nurse. A few years later, she was promoted to Superintendent of the Nurse Corps, the second woman to hold the position.

Higbee was the first female to be awarded the Navy Cross, for her unusual and conspicuous devotion to duty during WWI. And after her death, a naval combat ship was named USS Higbee in her honor. It was the first time a naval vessel had been named after a female service member.

Linnie Leckrone was one of the unsung heroes of WWI. She was part of a small gas and shock team that worked tirelessly in France during the war. Despite displaying extraordinary bravery caring for the wounded in the face of a tooth-rattling artillery attack, her return home went unmarked. There was no parade and no welcome-home ceremony.

Although Leckrone was going to be awarded a Citation Star for her efforts, she was discharged from the army before it was formally presented. Her courageous service was finally recognized posthumously in 2007 when her daughter Mary Jane Bolles Reed accepted a Silver Star in her place.

The Silver Star is the third-highest award for bravery granted by the U.S. military, and Linnie Leckrone was one of the first three women to receive it.

Elsa Brandstrom was nicknamed “the Angel of Siberia” for good reason. She was the daughter of the Swedish ambassador to Tsar Nicholas II and was in Russia during the outbreak of WWI. Determined to help, she volunteered and put her nursing skills to use with the Russian army.

In 1915, Brandstrom was in Siberia treating German prisoners of war with the Swedish Red Cross. Matters got more complicated when her Russian work permit was revoked, but that didn’t stop her. Brandstrom continued traveling to Siberia illegally for two whole years until the Russian authorities arrested her in Omsk in 1920.

Upon her release, she went back to Sweden and launched a campaign to help POWs. Her efforts included fundraising and founding a children’s home with room for more than 200 orphans. Eventually, she married and moved to the United States. But even there she dedicated herself to helping German and Austrian refugees.

Dorothie Feilding was born into a rich, aristocratic family in Warwickshire, England. She was presented to the King and Queen of England when she was 18 years old. But fielding shunned her entitled upbringing and jumped into the war effort with both feet.

She became an ambulance driver with a volunteer unit stationed in Belgium. And the Western Front soon provided its own challenges, from driving under enemy fire to dealing with inconvenient marriage proposals and lice.

Feilding was easy-going and charismatic, even hosting tea parties amongst the ruins of Furnes. Her bravery earned her a French Croix de Guerre (bronze star), a Belgian Order of Leopold II Knights Cross, and the English Military Medal for Bravery. This last honor was presented to her by King George V at Windsor Castle.

From writing to photography, Florence Farmborough was a woman of many talents. And she put them to good use during the war. She left Britain for Russia in 1908 and worked as a governess for a family in Kiev. Later, she worked as an English teacher, tutoring the daughters of an accomplished heart surgeon. But when war broke out, she joined the Imperial Russian army as a Red Cross nurse.

Farmborough tended to the wounded on the Galician and Romanian fronts. And in the midst of the madness and ravages of war, she was not only a dedicated nurse but also worked as a reporter for The Times and BBC Radio.

Using extracts from her journals, Nurse at the Russian Front was first published in 1974, detailing Farmborough’s wartime nursing experiences.

Julia C. Stimson was energetic, charismatic, courageous, and determined. Furthermore, she needed to make a difference during the Great War. Her passion and devotion to excellence were evident at an early age, as she was one of the few young women of her day to get an undergraduate degree.

Julia earned a place at Vassar College at the incredibly young age of 16. Her career path eventually led her to the Army Nurse Corps, and in May 1917 she went to France with Base Hospital 21. By 1918, she became the chief nurse of the American Red Cross in France.

From there, she was pulled back from the front-line to fill a vital administrative role in Paris, orchestrating the nursing service of the American Expeditionary Forces.

Through her efforts, thousands of wounded soldiers received good medical care. And as a result, she received the United States Distinguished Service Medal at the end of the war. She continued to work as a nurse after the war and was a key recruiter of female nurses for WWII. She was also the first woman to receive the rank of major in the U.S. army.

For Alice Ross-King of the Royal Australian Imperial Force (AIF), nursing during the war included surviving a pretty dramatic German air attack at the Casualty Clearing station where she was working in Omer, France.

Only five days after her arrival in Omer, German planes bombed the station. Missiles whistled out of the night sky and exploded all around her, throwing her to the ground. She staggered back to her feet, temporarily confused by the sound of planes and artillery roaring overhead. Bombs were bursting around the buildings and tents, but Alice ran straight into the danger zone, her only thought being the welfare of her patients.

Alice Ross-King’s inspirational service under enemy fire earned her the Military Medal for great coolness and devotion to duty.

Not all of the great nursing successes of WWI happened on the frontline. Anna Caroline Maxwell, who has been called the “American Florence Nightingale,” worked behind the scenes. And her dedication to education and improved standards helped to make nursing the prestigious profession it is today.

Anna is known for her role in establishing the U.S. Army Nurse Corps. She also ensured nurses were awarded military ranks. Her main focus through the years was education and training. She was the director of the Presbyterian Hospital’s nursing school, which later became Columbia University’s School of Nursing.

All this work and training became vital at the outbreak of World War I. Using her administrative gifts and educational programs, she was crucial in preparing nurses for active service.

The French government awarded her the Medaille de l’Hygiene Publique (Medal of Honor for Public Health).

Mairi Chisholm was a Scottish motorbike fanatic whose penchant for hairpin turns won her an invitation to join the Flying Ambulance Corps in Belgium. She and her biker-friend Elsie Knocker joined forces and were soon doing vital wartime work, ferrying wounded soldiers to a field hospital in Furnes.

Mairi also transported mutilated corpses to the mortuary. Yet, discouraged by the number of men they were losing, Mairi and Elsie decided to leave the Corps.

They found an abandoned cellar in Pervyse and set up their own illegal dressing station, just 100 yards from the trenches. With no affiliation to the Belgian Red Cross, they had to find their own supplies and support. Fortunately, Mairi and Elsie managed to be seconded to the Belgian troops stationed nearby. Together, they saved the lives of thousands of men on the Belgian Western Front Ð men who would have no doubt died on their way to the Corps hospital.

Mairi was awarded the Belgian Order of Leopold II Knights Cross, the Order of Queen Elisabeth of Belgium, the 1914 Star, and the British Military Medal.

Edith Cavell was a British nurse famous for treating countless soldiers, no matter their nationality, and helping as many as 200 Allied soldiers escape from German-occupied Belgium during WWI.

When Brussels fell to the Germans in November 1914, Cavell walked away from her British Secret Intelligence Service recruitment to hide wounded Allied soldiers and sneak them out of the country to safety. The soldiers were given fake identification and hidden until they could make it to the Dutch frontier.

In August 1915, Edith was betrayed by German collaborator Gaston Quien. German soldiers arrested Edith for treason and subjected her to a court-martial. Cavell admitted that she had personally harbored about 175 men in her home and helped them to escape. Her actions went directly against German military law. Despite international pressure for mercy, she was sentenced to death and executed by a 16-man German firing squad on October 12, 1915.

Highlighting the impact of Edith’s role in the war and the resonance of her ultimate sacrifice, a popular British starlet Anna Neagle played the fearless nurse in the Oscar-nominated 1939 film Nurse Edith Cavell. In addition to the numerous stone memorials that have been erected, streets, medical and nursing facilities, schools, and gardens, from the UK and Belgium to Australia, Canada, and the USA, have all been named in Edith Cavell’s honor.