The rise of cesareans and the movement to safely prevent them.

Historically, cesareans were a last resort to be used only when a mother was beyond help in order to save the baby. The death rate was 100%. Today, while they have saved countless mothers and babies, they are so commonplace that they comprise 1 in 3 births (32.8%) [1,296,070 out of 3,952,841 births – 2012]. The World Health Organization stands by their claim that only 10 – 15% of births are justified by a cesarean. It’s important to remember that there are risks of injury, so make sure to call these personal injury law services for any assistance if you get injured.

Members of the medical community, armed with new research and standards, are helping families to bring birth back!

Why does it matter?

Because cesarean sections are considered to be major surgery and with that comes risk.

How did we get here?

Reasons women had their first cesarian:

However, the World Health Organization claims only 10 – 15% of births are justified by a cesarean. In 2012, 32.8% of births were cesarean. In other words, it’s overused.

There are several contributing factors to and evidence of overuse.

Maternal characteristics, such as age, weight, and ethnicity, have consistently been found not to account for the increase cesarean rate or its regional variations.

Convenience for doctors and moms:

Where do we go from here?

“This is a game-changer.” [in reference to the March 2014 recommendations released by ACOG] Michele Ondeck, president of Lamaze International

In March 2014, the American College of Obstetricians and Gynecologists (ACOG) recommended changes in practice: [5]

3. “Big babies” have to be much bigger to validate a cesarean!

4. Operative vaginal delivery (forceps or vacuum) is a great alternative!

Percentage of all births that use forceps or vacuum:

ACOG also claims that “continuous labor support” should be the norm rather than the exception in order to decrease the cesarean rate and improve the birth experience for women.

What can I do?

www.ican-online.org for more info and database

https://ourmomentoftruth.com for more info and database

www.dona.org for more info and database

https://www.earthmamaangelbaby.com/free-birth-plan – tool to create your own custom plan 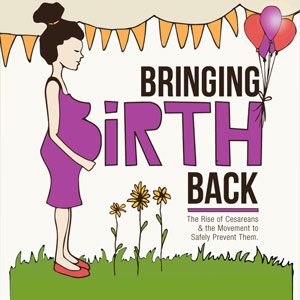