A startling Statistic
87% of all Registered Nurses are Caucasian.
But, in 2014: 62% of the U.S. population was Non-Hispanic White

1878: 33 year old Mary Eliza Mahoney is accepted into a nursing program.
She had worked 15 years in a hospital before that.
At the time, the program only allowed in 1 African American, and 1 Jew in the class.
1879: Mahoney became first African American nurse in U.S

As of 1930 only 60% of African American male children were enrolled in school.

1910: 23% of all men self-identifying as professional nurses were African American, by 1930 that number dropped to only 10%

98 years later: while RNs are still mostly white, there is greater diversity:

Education:
In 2011, among nursing students from minority backgrounds:

26.8% were enrolled in Bachelor of Science in Nursing programs

Of nurses who have master’s or doctoral degrees
11% are Black or African American
10.4% are Caucasian
8.4% are Hispanic

Question: how long do you think nursing will remain a white dominated occupation? 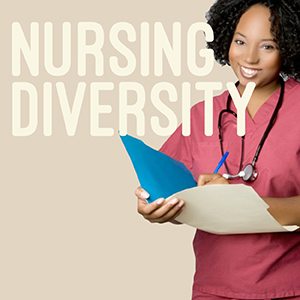