The Dark Side of Nursing

Registered nurses in the U.S.

Those who work in nursing are among the most likely workers to face violence on the job.

Violence can occur anywhere in a hospital, but it’s most common in:

Emergency nurses often face some of the most belligerent and incoherent patients.

ER nurses who reported being regular targets of verbal abuse

Emergency nurses often come face-to-face with patients who are mentally ill, intoxicated or otherwise violent. As a result, a great many of these nurses report facing serious physical violence and intimidating verbal abuse.

Among nurses who reported being targets of verbal abuse

Patients were the perpetrators in 97.8% of physical violence incidents and 92.3% of verbal abuse cases. 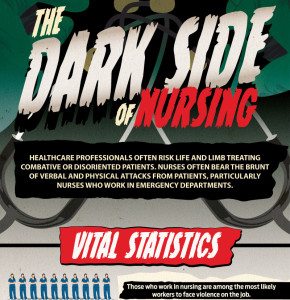